We ship worldwide
K-Live Saga Antelope NFTs 30% off on all new orders.

Lexzy Doo Ske Ske King was the first artist who worked, sponsored, and was managed under the brand K-Live Entertainment/H.I. T Promo limited in 2011, before the era of Sweet-Boyz ‘Hold It Down There’ by Peter and Paul in 2012 -2013. The brand clothing line merchandise and accessories was officially launched on 4th December 2020. The clothing line merchandise and accessories K-Live fashion gained its recognition in 2014 after the music recording deal signing and sponsoring of Nflane Eric Azzun (Bolojo Master), the brand K-Live Entertainment/H.I. T Promo Limited was giving out free clothing merchandise and accessories to the public, gift vouchers and gadgets. On 4th December 2020 after the official launched of their fashion clothing line in London United Kingdom, K-Live Entertainment/H.I.T Promo Limited also gave out launching discounts, cash give away, free Lebara Mobile’s, MTN Mobile’s, Airtel Mobile’s, and Lyca Mobile’s top-up vouchers to the public. 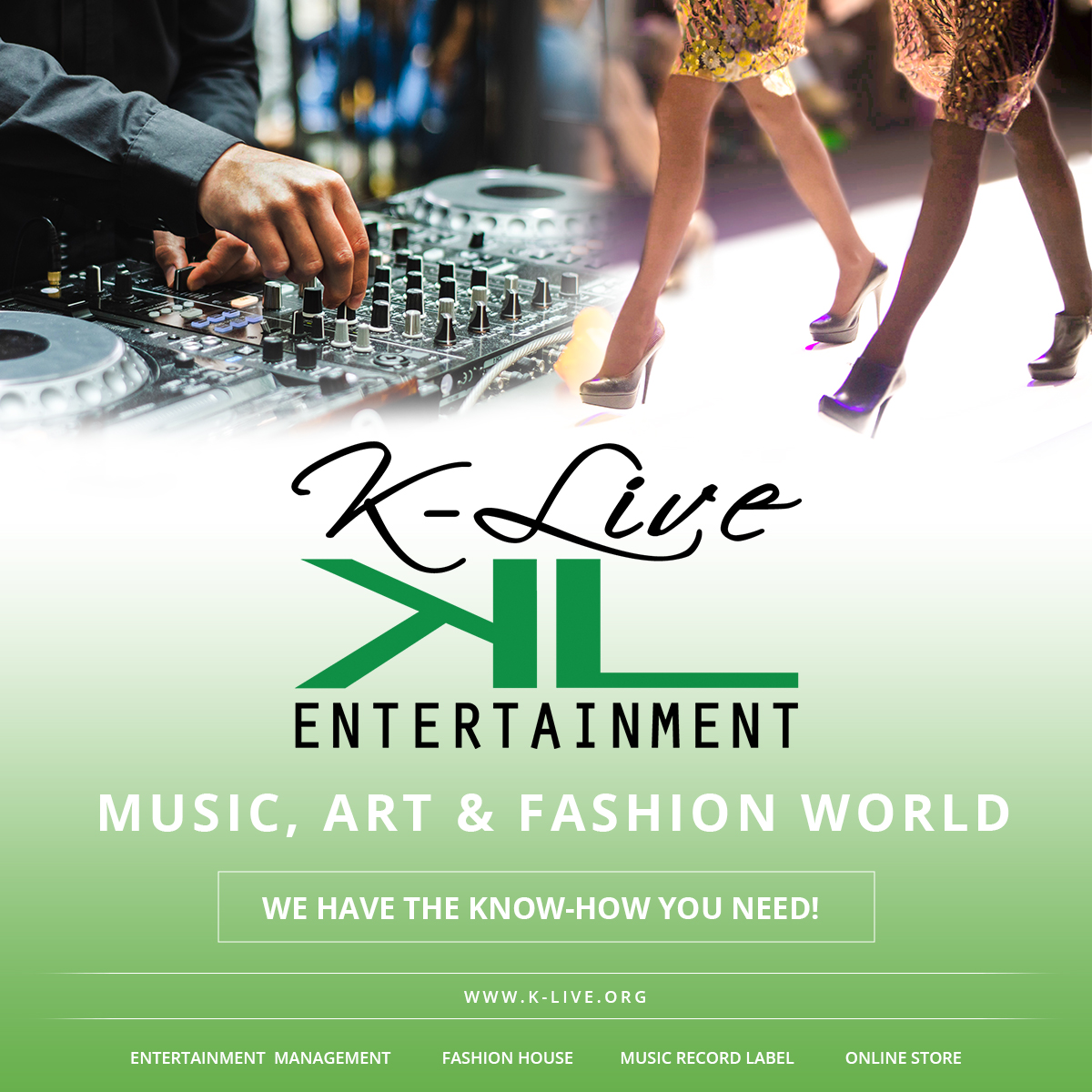 K-Live Entertainment/H.I.T Promo limited was legally registered in England and Wales on 1st February 2016 with registration number 09980978 and VAT registered number GB 353 9693 57 . Registered and head office is in London, England, its studio office in Liverpool England, United Kingdom. It is an independent music record label and fashion that got its grip from the bottom by creating events, signing arts, and nurturing their artistic career. The brand/business, K-Live Entertainment Limited Certified Trade-mark number is UK00003700953. The brand started with Afro-Hip Hop musical artists and were able to get recognition in the African, America and Western region despite being founded in the United Kingdom.

As debut, the brand signed five musical artists whose musical and artistic careers were nurtured, managed and sponsored during their contractual artistic/musical agreement with K-Live Entertainment/H.I.T Promo. The record label is continually on the lookout for a Grime artist / an R&B arts.

Recently, K-Live Entertainment Limited launched its brand NFT’s on Open-Sea and Crypto.com NFT’s market platform and available for all purchases. To add to it, the brand became partner’s also with Amazon market platform, to enable our customers purchase all its brand merchandise and accessories via their favourite outlet’s.

Our clothing is hundred percent (100) cotton materials, 3D embroidered on all our clothing line merchandise, and NONE printed materials/merchandise. OUR accessories are also same designs for the K-LIVE KL LONDON, K-LIVE KL and KL LONDON designs on our high fashion end exclusive rhinestone masks, to comprehend your occasional outfits wear/to high ceremonial event or occasions and available is OUR everyday /daily use K-Live flocks masks and both masks are made in London United Kingdom by Cest Fade Ltd.

K-LIVE men’s original leather wallet and women’s original leather purses are also same designs with a spectacular embossed around and that is on the way for K-Live Entertainment/H.I.T Promo Ltd. clothing line launching to be added. We have more branded designed accessories on K-Live acrylic stickers on our three (3) official design’ K-LIVE KL LONDON, K-LIVE KL and KL LONDON AND the K-Live LOGO magnetic is K-LIVE KL ENTERTAINMENT designed only. OUR Key holders/key rings are also of same official designs of K-Live AND our give away CALENDERS also comes with our K-LIVE KL LONDON, K-LIVE KL and KL LONDON design’s. K-Live clothing line/shop comes with an official K-Live give away carrier bags of high-end styles and large sizes on both white and purple K-Live Entertainment official brand colours. Our mailer poly also comes on our official brand designed, both on small and large sizes available for your everyday shopping 24 hours on K-Live.org shop platform and always expect surprised gifts/goodies from K-Live shop whenever you shop/buy online or outlets from us at your convenient time / places.

We have our summer lines that are coming out soon and already at the factory to be distributed sooner than the public expectation. K-Live Entertainment Limited are partners with Open-Sea, partners with Crypto.Com/NFT, SM Active Beauty Limited and we are license holders and partners with the British music Copyright Collective (PPL) Phonographic Performance Limited. We recently became partners with the Amazon and available is our Amazon Prime next day delivery services on all our items.

IN recent days, we have observed, monitored, and worked very closely. We can gladly say, we are ready to present you our first brand NFT’s collection K-Live SAGA ANTELOPE, representing our brand K-Live Entertainment and the all NFT’s art can be purchased via Open-Sea market platform and Crypto.com/NFT’s platform. There are 30% discount on all our NFT’s purchases and can be use on our official website at no cost. Click to secure your K-Live Saga Antelope NFT’s assets and get your discounts code for your clothing merchandises/accessories.

Popularly known as Mr Kapish UK Afro Hip-Hop legend was born in Benin city Edo state, Nigeria on Christmas Day 25th of December 1982 to Mr & Mrs Reverend Godwin Osadolor Ogbebor. Mr Kapish, a humble father of one child, who grew up in his family home Esogban street, Saint Saviour Benin city Edo state, Nigeria. Mr Kapish Osarenren John Ogbebor is the last born of 8 siblings, he grew up in an Anglican and a Pentecostal Church environment as his biological father was a minister of God, a Priest, and an ordained Anglican Reverend in the Church. Osarenren John Ogbebor was one of the choristers in the Church where his father was ministering the word of God and he became the choir master himself at an incredibly early age, playing the Church drums, singing, and leading the choristers at his father’s First African Church of God, in Benin City Edo State Nigeria. In as much that he is into entertainment, he is also someone who was baptised and well-disciplined in a Christian Biblical way and he still practice his Christianity faith as a Pentecostal Christian till date.

When there is a mention of the Afro Hip-Hop in United Kingdom, the name MR KAPISH will ring a bell.

MR KAPISH can be described as one who has an undying passion for entertainment and creative arts. He has Worked as a model, actor, A&R, voice over artist and PR consultant.

He has pioneered some musical artists based in UK and Africa at large and has worked with some famous names in the entertainment sector.

MR KAPISH was one of the contestants on Britain’s biggest and funniest television prime-time game show called ‘WILD THINGS’. A physical and mental obstacle games. He was also a contestant on an ITV show called PICK ME held in October 2015.

MR KAPISH loves fashion and can be described as a fashion oriented individual, dedicated, creative, problem solver and goal driven. These attributes got him this far in his career. He is very keen to learn and offers his skills and experiences. He can be seen as one who sees failure as an opportunity to rise and conquer as achieving new goals is his target.

MR KAPISH over the years has proven to be a very punctual man, reliable with ability to take initiative which explains how he was able to take up several tasks with high success rate.

Mr KAPISH is a man of many hobbies all of which reflects in what K-LIVE offers.

He is a lover of fashion and style, creative cooking, reading, traveling, and developing new skills, gym, and sports, which also explains his well structure
Athletic/muscular body shape.

While working as an artist promotion agent and manager, Mr John was able to;
* Send out artistic demos to labels, radio stations, local print media, and online publications.
* Book gigs and invite labels and the media to the shows.
* Network and talk to people about the band.
* Help book studio time and practice sessions.
* Explore funding opportunities for the band.
* Negotiate financial deals with the label for expenses like touring and recording.
* Oversee every other aspect of management including people working for the band, like accountants, agents, and merchandisers.
* Create platforms where the artists can be promoted regularly.
* Keep track of receipts and outgoings, arranging merchandise deals and coordinating recordings, marketing and publicity with record label, hiring and consulting with music A&R’s.
• Creating platforms where the artists can be promoted regularly and globally.

• Keeping tracks of receipts and outgoings, arranging merchandise deals, and coordinating recordings, marketing, and publicity with record label, hiring and consulting with music A&R’s and other brands.
• Music video directing and producing.
online publications.
* Book gigs and invite labels and the media to the shows.
* Network and talk to people about the band.
* Create platforms where the artists can be promoted regularly.
• Fashion management and modelling

One amongst so many feats achieved by MR KAPISH was his ability to get endorsement deals and commercial Ads for his artist even without being signed to a known record label. He was able to achieve this by putting his negotiation and interpersonal skills to use.
As part of his innovation to promote the works of K-LIVE and to keep clients abreast, MR KAPISH is launching an online magazine which promises to be explosive and informative as each series is released.
He will also be launching his first book very soon which will birth subsequent books of Mr. Kapish called Life Cover – Vol1 (Legends do Cry), because he is loaded with content, and he loves to share his knowledge.